Brandon Ogbunu is a radical collaborator 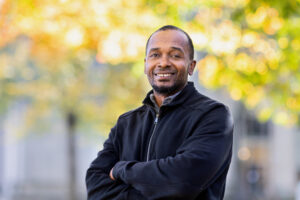 Brandon Ogbunu is an assistant professor in the Department of Ecology and Evolutionary Biology at Yale University. As part of the MLK Scholars program, Ogbunu is pursuing research at MIT with Professor Matthew Shoulders. Photo: Steph Stevens

Learning has always come naturally to Brandon Ogbunu. When he was a child growing up in Manhattan, his mother, a teacher, instilled in him an appreciation for school, the sciences, and curiosity. At work, she taught mathematics, social studies, and special education. At home, she taught her son to embrace art, literature, and sports in addition to science, laying the groundwork for a well-rounded approach to learning that would inform the rest of his career.

Ogbunu grew up during the AIDS epidemic. Witnessing the devastating effects of the virus kindled an interest in disease. Although he describes himself as “a bit of an underachiever” in high school, he found his identity as a scholar during his time at Howard University. He majored in chemistry due to its reputation as the “central science” and voraciously read books on math, economics, and history to gain a more nuanced understanding of the topic. Toward the end of his undergraduate degree, Ogbunu learned more about the intersection between inequality and public health and began to consider how forces like poverty can drive the spread of diseases like HIV, tuberculosis, and malaria.

After graduating from Howard in 2002, he traveled to Kenya on a Fulbright fellowship. There, while studying the chemical ecology of malaria, he became captivated by evolution. “I fell in love with it as kind of a governing viewpoint on how the natural world works,” he says.

When he returned to the United States, Ogbunu studied medicine at Yale, but found himself somewhat overwhelmed with career options. There were many ways to approach the problem of disease, but would he do so as a physician? An evolutionary biologist? A computer scientist? An economist? After his time in Kenya, he knew that whatever path he took, evolutionary reasoning — an approach to research that focuses on the practical applications of evolutionary theory — would have to be at the center of it.

It was then that Ogbunu took an interest in Professor Paul Turner’s virology lab. Turner, a professor in the Yale Department of Ecology and Evolutionary Biology, had just published a paper that addressed virus evolution through the lens of game theory. “I was like, this is exactly the kind of lab I want to be in,” Ogbunu recalls.

Ogbunu completed his PhD in microbiology in 2010. His dissertation revolved around a concept called “evolvability” — the capacity of organisms to evolve — in the context of infectious disease.

From there, Ogbunu decided to cultivate his interest in data science with a postdoctoral fellowship at the Broad Institute and Harvard University, where he studied population genetics under the supervision of Daniel Hartl.

It was during this postdoctoral training that Ogbunu first encountered professor of chemistry Matthew Shoulders, who at the time was a junior faculty member at MIT. The two scientists instantly hit it off. “We each gave each other a new language to describe the problems we were thinking about,” Ogbunu says of their shared interest in protein evolution. “We could have a conversation with the person across the aisle. And I found that to be a model for the way that I collaborate in general.”

After completing his postdoctoral training, Ogbunu taught for two years at Brown University, and in 2020, he joined the Yale faculty as an assistant professor in the Department of Ecology and Evolutionary Biology.

Ogbunu’s current research takes place at the intersection of evolutionary biology, genetics, and epidemiology. His lab uses experimental evolution, mathematical modeling,and computational biology to investigate disease across scales: from the biophysics of proteins involved in drug resistance, to the social determinants driving epidemics at the population level.

Ogbunu decided to apply for the Martin Luther King Jr. (MLK) Visiting Scholars and Professors program because, during his time at the Broad Institute, he grew to admire the interdisciplinary culture of MIT. “I believe in disciplines, and I believe in expertise,” Ogbunu explains, “but I don’t believe that you need to be relegated to any kind of singular domain. You should be able to think broadly.” He also appreciated MIT’s focus on the practical applications of scholarship. “Whatever it is you’re making,” he says, “be it literature, or poetry, or biomolecules — everybody likes to make things.”

At MIT, Ogbunu is working in the Department of Chemistry alongside Shoulders, whose lab focuses on understanding the mechanisms of protein folding and evolution. “I really try to maximize connection time,” Ogbunu says of his day-to-day work at MIT. He spends his time collaborating with graduate students and postdocs in the Shoulders Laboratory, writing manuscripts and developing proposals with Shoulders himself, and attending meetings and seminars in various departments across campus.

Ogbunu is also embracing his artistic side through collaborations with fellow MLK Visiting Scholars. “The MLK Fellows are the most impressive people I’ve ever been around,” he says. “The opportunity to be in a cohort with them is really truly an honor.”

With Wasalu Jaco, widely known by his stage name Lupe Fiasco, Ogbunu has been exploring the relationship between rap and evolution and between music and data science. Ogbunu also hopes to collaborate with Eunice Ferreira, with whom he shares a passion for theater arts. In fact, Ogbunu was recently appointed to the board of the Catalyst Collaborative, a collaboration between MIT and Central Square Theater. He considers this appointment to be one of the great honors of his career.

“I like cutting-edge, provocative, and progressive ideas in a number of realms,” Ogbunu says of his love for the arts. “I love creative intersections between science and society. And I love creative, cool people who are trying to make the world a better place.”

Ogbunu’s preferred creative outlet is writing. He has written for a number of publications, including Scientific American, Undark, and the Boston Review, and currently serves as an Ideas contributor at WIRED magazine. Ogbunu views science writing as part of the “scientific instrument,” and he uses it as an avenue to explore new ideas. Much of his work also deals with issues of diversity, discrimination, and accessibility in science.

“I’m interested in influencing who gets to become a scientist,” he says. “That’s a very deep and important part of my identity.” Ogbunu’s mother, whom he identifies as his greatest inspiration, was extremely gifted, but it was difficult for a woman of her generation to pursue a career in science. Ogbunu wants to do his best to ensure that the opportunities that were unavailable to her are available to others. “Even in 2022 and beyond, there will be people who don’t have access and don’t have opportunity,” he says. “I think their lack of access is a great shame for everyone.”

In the future, Ogbunu would like to add “mechanistic depth” to his research by thinking about disease evolution on a more molecular level. He also plans to continue embracing his multidisciplinary approach to learning. “I want to lean into my multiplicity and no longer hide from it, and no longer apologize for it,” he says. “I want to work in all these disciplines, but via radical collaboration. That’s the thing that I pride myself on: the art of collaboration.”