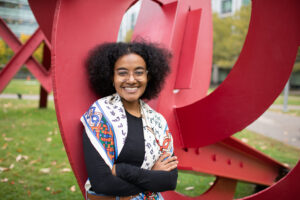 “MIT really is the place to be if you want to do cool, interdisciplinary, on-the-cutting-edge science, particularly in biological engineering, chemical biology, and biology. I knew my training would be top-notch,” says Amanuella Mengiste, a third-year graduate student in the lab of chemistry
professor Matthew Shoulders. She was selected as the inaugural recipient of the prestigious Robert J. Silbey fellowship for the fall 2020 semester.

Robert J. Silbey, who passed away in 2011, joined the MIT Department of Chemistry faculty in 1966 and became head of the department in 1990, then director of the Center for Materials Science and Engineering in 1998. He later served as the Dean of Science from 2000 to 2007. Silbey was renowned for his leadership and political acumen as dean, his commitment to enhancing MIT’s education and research, and his work in condensed phase theory and quantum biology — fields that he helped to pioneer. The Robert J. Silbey fellowship was created in his memory to support young women in chemistry.

Amanuella (Mani) Mengiste grew up in Addis Ababa, Ethiopa, and attended the equivalent of a U.S. charter school for all her pre-college schooling. Because the school did not offer any advanced classes and had no working teaching laboratories, Mengiste’s initial access to experimental science was very limited.

From an early age, Mengiste was a curious and bookish child, and her parents embraced this attribute. “They never hesitated to buy the books I wanted,” she remembers. “My dad, who was a civil engineer with an innate curiosity himself, would spend hours gazing at the stars with me because I initially aspired to be an astronaut.”

One of Mengiste’s favorite childhood memories is the time she and her father spent preparing for her first school science fair. He had focused on renewable energy and green agriculture in his career; so they built a model of a wind turbine for wind-powered energy generation. “That was my first hands-on experience with science and engineering, and I guess I never looked back,” she reflected.

“I truly believe I won the lottery with my wonderful parents,” she says. “Together they nurtured me and my younger brother until my father unfortunately passed away when I was 13. My widowed mother then continued to raise me and my brother as a single parent. And if I may say so
myself, she’s done an incredible job.”

Higher education in Ethiopia is not set up to encourage academic exploration in the way that liberal arts institutions do in the United States. In their last year of high school, students take a national exam and, depending on their results, get channeled into a select few careers. This had caused Mengiste’s parents to worry that their daughter would not be able to fulfill her academic aspirations in Ethiopia.

“One night, I remember, when I was 12, my dad made a list of U.S. universities that he thought might be a good fit for me.” As he considered each option, he put a strike through the name, until one remained. “Princeton will be the perfect fit for you!” he declared. Years later, in her senior year, Mengiste applied to a number of schools, including her father’s first choice. “I got into Princeton, and that changed my life,” she says.

When Mengiste arrived at Princeton in 2014, she quickly discovered her passion for experimental science and research while working in the lab of Professor Abigail Doyle, an organic chemist whose lab specializes in the
development of new catalytic methods. There, Mengiste developed a new reductive cross-coupling reaction that allows nickel-mediated, photo-assisted coupling of aliphatic aziridines and aryl halides. She also expanded the lab’s previously reported methodology to include the photoassisted cross-coupling of styrenyl azirdines with aryl halides.

In the fall of 2018, after graduating with high honors with her bachelor of science in engineering, Mengiste headed to MIT to pursue a PhD in chemistry.

Her work up until that time was in hard-core synthetic methodology, but when she arrived on MIT’s campus, she switched gears and joined Professor Matthew Shoulders’ biological chemistry group. “Part of my course work at Princeton was in the realm of biological engineering, biochemistry, and chemical biology,” she explains, “and I found that the big questions researchers were asking in those fields suited my intellectual interests perfectly.”

Mengiste has been working on two projects in the Shoulders’ group, both in the ever-expanding field of directed evolution. The first project aims to expand on a method the laboratory developed to cause targeted mutations in E. coli. Specifically, she and her lab colleagues are working to expand the mutagenic ability of the lab’s previously reported tool.

Mengiste’s second project focuses on using mPACE, a platform that allows researchers to evolve mammalian proteins directly within mammalian cellular environments. She is particularly interested in evolving a class of proteins known as G protein-coupled receptors (GPCRs). GPCRs are the conduits by which cells detect external stimuli — be they photons, small molecules, or proteins. Members of this large protein family exist at the interface between extracellular and intracellular environments and are the bedrock on which much of cell signaling is based. As such, there is immense interest in understanding, co-opting, and controlling GPCRs and the signal transduction pathways they modulate.

Mengiste’s long-term goal is to develop and implement highly adaptable GPCR-specific strategies to create GPCRs that are constitutively active — that is, activated by pharmacologically inert small molecules and capable of activating different signaling pathways in a controlled manner.

Mengiste cares deeply about education, as did Professor Silbey. Her first experience with teaching was in high school when she volunteered as a math and english tutor for three years. At Princeton, she became a peer tutor at the McGraw Center for Teaching and Learning and served as a peer academic advisor for her residential college. “At MIT, I was really excited to TA for 5.111,” she says of the General Institute Requirement (GIR) course. “It was truly rewarding to work with such bright, hardworking students, and I still keep in touch with a number of them!”

In her limited spare time, Mengiste’s favorite pastime is reading. She participates in a monthly literary and arts bookclub collective that focuses on reading works and engaging with art by Ethiopian and Eritrean authors and artists, which she says has been an amazing experience.

Mengiste also cares deeply about community service. Her most meaningful engagement at MIT was with the MIT Summer Research Program (MSRP) where, for two summers, she served as a pod leader — a mentor for students from underrepresented backgrounds conducting summer research at MIT. “I remember how intense it had been for me starting out in the Doyle lab,” she remarks, “and I wanted to make sure that I could support students who were going through similar life-changing experiences at MIT.” One of her current roommates is a mentee of hers from MSRP 2019. “The bonds formed over that summer program are really special,” she says, “and last a lifetime.”

This article appeared in the Winter 2021 issue of Science@MIT.