Basic building blocks to the stars 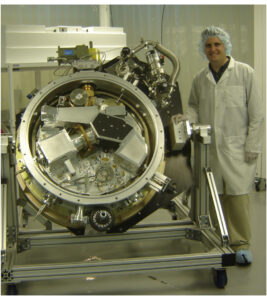 Professor Robert Simcoe, principal investigator, stands next to FIRE, the infrared spectrometer supported by the National Science Foundation and funded by the Curtis and Kathleen Marble instrumentation fund. Photo: Courtesy of the faculty

Curt Marble grew up in St. Petersburg, Florida and was in his own words, “a typical engineering kid who liked to take things apart.” At MIT, Marble studied electrical engineering and then spent his career programming for computer-based medical information systems. After his retirement, Marble pursued his long-standing interests in cosmology and astrophysics and became engaged with the MIT Department of Physics. While there are many ways to support the work of the faculty and students, Marble decided to provide funds to support instrumentation projects. “I thought that a discretionary fund could provide the rapid and flexible means to support medium-sized projects or the seed funding for large ones,” says Marble.

One of the early projects that Marble’s instrumentation fund helped to complete was the development of FIRE, a fully cryogenic infrared spectrometer for the 6.5 meter Magellan telescopes at Las Campanas Observatory (LCO), in Chile. LCO is operated by a consortium of institutions, including MIT via MIT Kavli Institute for Astrophysics and Space Research and its director Robert Simcoe, the Francis L. Friedman Professor of Physics.

FIRE was designed and built by Simcoe and members of his lab who study the formation of the earliest stars and galaxies by constructing custom-built spectrometers for major astronomical observatories. FIRE classifies objects based on their infrared spectra and can determine how faraway in time a cosmic object might be. Recently, the team used FIRE to identify the most distant known quasar, whose light was emitted when the universe was just 5 percent of its present age.

“Curt has been a wonderful partner for the faculty and students in physics, and supportive of our ambitions to explore the distant universe at the MIT Kavli Institute,” says Simcoe. “His detailed questions about our methods and discoveries reveal an inquisitive spirit. His fund likewise enables us to unleash the technological creativity of our amazing research teams.”

Simcoe’s lab continues to work on development of instrumentation such as WINTER, a widefield camera mounted on a telescope that will survey the cosmos for infrared light.

Fortunately for MIT, Marble’s interest isn’t limited to the cosmos. He has invested in MIT’s success in many different areas. He and his late wife, Kathy, created the Marble Center for Cancer Nanomedicine directed by Professor Sangeeta Bhatia within the Koch Institute for Integrative Cancer Research. The Marble Center is the first virtual nanomedicine center at MIT dedicated to tackling grand challenges in cancer detection, treatment, and monitoring with a focus on miniaturization and convergence — the blending of the life and physics sciences with engineering.

In addition, the Marbles contributed to the Green Center for Physics when it needed renovation and they have endowed an MIT presidential fellowship for graduate students and faculty chairs — including the funding for the professorship held by Nergis Mavalvala, the Curtis (1963) and Kathleen Marble Professor of Astrophysics and current dean of the School of Science.

“I believe in the importance of basic research, and MIT is among the best at getting that done,” says Marble.