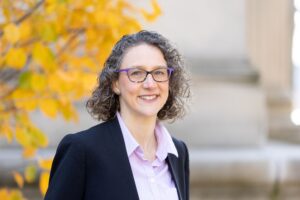 Fiore is the first person to be appointed to this senior position, a full professorship that was generously endowed to EAPS by Professor Emeritus Peter H. Stone and Professor Paola Malanotte-Rizzoli. The couple’s $5 million donation sparked a multiyear campaign to find a suitable candidate to fill this prestigious named chair, intended to attract top scientists and enhance the department’s contributions to research, teaching, and mentorship in atmospheric sciences, physical oceanography, climate sciences, or planetary sciences.

The recruitment committee found a winning combination in Fiore, who brings with her 25 years of experience in the geosciences. She specializes in understanding how polluting emissions from anthropogenic and natural sources influence atmospheric chemistry, the climate system, and air pollution on regional to global scales, as well as the drivers of these interactions.

“I am immensely grateful for the gift by Peter Stone and Paola Malanotte-Rizzoli — long-term colleagues and friends of EAPS — and excited to welcome Arlene into the EAPS community,” says head of EAPS Rob van der Hilst. “Professor Arlene Fiore brings unique expertise to the EAPS climate program, at a time when MIT is ramping up its efforts to understand the underlying Earth systems and create solutions for mitigation and adaptations to climate change. Combined with her accolades in teaching, mentorship, and organization in support of women and diversity, she is a huge asset to our research, education, and outreach programs.”

Fiore comes to EAPS from the Department of Earth and Environmental Sciences and Lamont-Doherty Earth Observatory of Columbia University, where she breaks her research down into four pillars: air pollution, chemistryclimate connections, trends and variability in atmospheric constituents, and biosphere–atmosphere interactions. She uses a range of models alongside remote sensing and in situ observations to understand tropospheric ozone chemistry, its sensitivity to different sources and sinks including the terrestrial biosphere, on hourly and local scales up to global and decadal dimensions. Fiore and her group also investigate regional meteorology and climate feedbacks due to aerosols versus greenhouse gases, future air pollution responses to climate change, as well as the factors controlling the oxidizing capacity of the atmosphere. As a member of the NASA Health and Air Quality Applied Sciences Team, she partners with air and health management groups to address emerging needs with applications of satellite and other Earth science datasets.

Since earning her undergraduate and PhD degrees from Harvard University, Fiore held a research scientist position at the National Oceanic and Atmospheric Administration’s Geophysical Fluid Dynamics Laboratory before joining Columbia University. She has since served on numerous boards and earned several awards. Among these are participating on the board of the Atmospheric Sciences and Climate of the National Academy of Sciences, the U.S. CLIVAR Working Group on Large Initial-Condition Earth System Model Ensembles, the American Meteorological Society Statement on Atmospheric Ozone, and the Steering Committee for the IGAC/SPARC Chemistry-Climate Model Initiative. Fiore’s honors include the AGU James R. Holton Junior Scientist Award, AGU’s James B. Macelwane Medal, and the Presidential Early Career Award for Scientists and Engineers (PECASE), which is the highest honor bestowed by the United States government on outstanding scientists and engineers in the early stages of their independent research careers. She is one of six co-founders of the Earth Science Women’s Network, promoting peer mentoring, career development, and equality in the geosciences.

“I enjoy studying interactions across realms that have in the past been considered separately — such as the climate system and air quality, urban air pollution and global atmospheric chemistry, the stratosphere and troposphere, terrestrial biosphere and atmosphere,” says Fiore. “Currently, I’m excited about a new research direction that seeks to identify imprints of climate variability on short, sparse observational records of trace gases, so that we can better detect and attribute the influence of human activities on atmospheric composition and climate.”

Further, at MIT, she looks forward to inspiring the next generation of problem solvers to understand atmospheric chemistry and climate system data, and equipping them to develop and leverage new computational methods.

“Fiore is an accomplished researcher in several areas, especially the linking of atmospheric chemistry with climate change phenomena such as changes in rainfall and heat waves,” says Susan Solomon, the Lee and Geraldine Martin Professor of Environmental Studies at MIT. “EAPS has a lot of strengths in atmospheric chemistry, as well as plenty of depth in climate dynamics and meteorology. Fiore’s conversations with both have been positively electric, and we expect great new linkages to amplify our science impacts after she arrives.”

Stone and Malanotte-Rizzoli see the greatest challenge of the 21st century to be climate change, making research in the geosciences front and center at this point in history. As such, they endeavored to continue the “tradition of excellence in atmospheric, climate, or planetary sciences,” at MIT.

At a reception honoring the generous endowment in 2015, van der Hilst described Stone and Malanotte-Rizzoli as “inspirational leaders,” whose gift not only strengthens the department but also bestows the unique “privilege of having their names forever associated” with EAPS. Both Stone and Malanotte-Rizzoli hold numerous awards and honors for contributions to their fields, and are renowned for their dedication to research and teaching alike.

Combined, Stone and Malanotte-Rizzoli have contributed 75 years of active service to the Institute and department. Stone first joined MIT in 1972 as a visiting professor of meteorology, and went on to become department head, director of MIT’s Center for Meteorology and Physical Oceanography, and director of the MIT Climate Modeling Initiative. He was at the forefront of atmospheric and climate dynamics research throughout his career, right up to his retirement in 2007. Malanotte-Rizzoli came to MIT in 1981 as an assistant professor of oceanography. While her physical oceanography interests are varied, she was named professor of physical oceanography in 1992, and spent 12 years directing the graduate-level MIT-Woods Hole Oceanographic Institution Joint Program in Oceanography and Ocean Engineering. Malanotte-Rizzoli has also been a tireless voice in promoting gender equality among faculty at MIT.

On the selection of Fiore to the post, Malanotte-Rizzoli says, “we wish to see superb scientists and teachers, not limited to a very specialized scientific sector but who can cross, with equal excellence, disciplinary boundaries, and build a new generation of researchers capable to do so. Arlene Fiore is such an example.”

“We’re very grateful for the chance to bring in an accomplished senior climate person to MIT — especially at this special moment in history when MIT is marshaling its abilities to help address the climate challenge,” says Solomon. “The timing couldn’t be better for strengthening the already considerable climate arsenal in EAPS!”