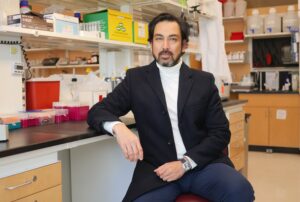 When Digbijay Mahat arrived at MIT in 2017 to begin his postdoctoral studies, he had one clear goal: become an expert in cancer research and diagnostics to improve health care in his home country of Nepal. In 2020, when the COVID-19 pandemic laid bare resource disparities around the world, his goal did not waiver. But it did expand to fill a more immediate need — help Nepal find the best way to navigate widespread COVID testing requirements and vaccine rollouts.

Mahat was born in the western region of Nepal, where his family has owned a large swath of land for generations. Before Mahat was born, his grandfather passed away unexpectedly, and, as the eldest son, Mahat’s 21-year-old father assumed responsibility for his five siblings, giving up the opportunity to pursue his own education. Perhaps because of this, he made it his mission to give Mahat the education he never received.

While his father wished him all the success and prestige of a medical career, Mahat had other plans. Toward the end of high school, he became captivated by song writing, and even secretly used his school tuition money one semester to record an album. “It was a disastrous flop,” he now recalls with a smile.

Although his foray into music provides comic relief today, at the time, Mahat was dismayed to be back on the medical track. He was able to at least convince his father to let him go to the U.S. for college. He ended up at Towson University in Maryland, living with his aunt and uncle and delivering pizzas to support his family back in Nepal.

As a molecular biology, biochemistry, and bioinformatics major, he took every research opportunity he could get and became enthralled by breast cancer research. Shortly thereafter, his mother was diagnosed with the same disease, which strengthened his conviction to learn as much as he could in the U.S. and return to Nepal to help patients there.

“The state of cancer diagnostics is very poor in Nepal,” Mahat explains. Patient biopsies must be sent to other countries like India — a costly practice at the mercy of politics and travel restrictions. “The least we can do is become self-sufficient and provide these vital molecular diagnostics tools to our own people,” he says.

Mahat went on to earn his PhD in molecular biology and genetics from Cornell University. When the opportunity to pursue postdoctoral studies with MIT professor Susan Lindquist fell through (Lindquist tragically passed from cancer in 2016), Mahat scrambled to find another position, building up the courage to send a formal research proposal to MIT professor, Koch Institute member, and Nobel Laureate Phil Sharp. A few days later, he joined Sharp’s lab.

“From the beginning, the things that struck me about Phil were his humility, his attention to experimental detail, and his inexplicable reservoir of insight,” Mahat says. “If I could carry even just some of that same humility with me for the rest of my life, I would be a good human being.”

In 2018, Mahat and Sharp filed a patent with the potential to revolutionize disease diagnostics. Widely available, single-cell sequencing technologies reveal the subset of RNAs inside a cell that build proteins. But Mahat and his colleagues found a way to take a snapshot of all the RNA inside a single cell that is being transcribed from DNA, including RNAs that will never become proteins. Because many ailments arise from mutations in the “non-coding” DNA that gives rise to this “non-coding” RNA, the researchers hope their method will help expose the function of non-coding variants in diseases like diabetes, autoimmune disorders, neurological diseases, and cancer.

Mahat was still immersed in this research in early 2020 when the COVID-19 pandemic escalated. As case numbers soared around the world, it became clear to him that the wealth of testing resources available on MIT’s campus — and throughout the U.S. generally — dwarfed the means available to his family back in Nepal. Polymerase chain reaction (PCR) testing remains the most popular and accurate means to detect the virus. While PCR machines are quite common in molecular biology labs across the US, according to Mahat, the entire country of Nepal owned just a few at the start of the pandemic.

“Digbijay was focused intensely on developing our novel single-cell technology when he became aware of Nepal’s challenges to control the COVID-19 pandemic,” Sharp recalls. “While continuing his research in the lab, he spent several months contacting leaders in pharmaceutical companies in the U.S. and leaders in public health in Nepal to help arrange access to vaccines and rapid tests.”

Mahat was already in contact with the Nepali Ministry of Health and Population regarding the state of the country’s cancer diagnostics, and so the government called on him to advise their COVID testing efforts. Given the high cost and limited availability of PCR machines and reagents, Mahat began discussions with an MIT-spinoff biotechnology company, Sherlock Biosciences, in order to bring alternative testing technology to Nepal. These COVID tests, which were developed at the Broad Institute of MIT and Harvard, use the CRISPR/Cas9 system — rather than PCR — to detect the SARS-CoV2 virus that causes COVID-19, making them cheaper and more readily available. Sherlock Biosciences ultimately donated $100,000-worth of testing kits, supplemented by an additional $100,000 grant from the Open Philanthropy Project to help purchase the equipment necessary to implement the tests. In December of 2020, Mahat and his wife Rupa Shah flew to Nepal to set up a testing center using these new resources.

Although this required Mahat to briefly pause his MIT research, Sharp was supportive of these extracurricular pursuits. “We are very proud of his effective work benefiting the people of Nepal,” Sharp says.

These days, Mahat is nothing short of a local celebrity in Nepal. Despite his current drive for ensuring vaccine equity, his ultimate goal is still to bring cancer treatment resources to the country. He not only envisions setting up his own research center there, but also hopes to inspire young people to pursue careers in research. “Before me, no one in my entire village had pursued a scientific career, so if I could motivate even a few young kids to follow that path, it would be a win for me,” he says.

But Mahat adds, he’s not ready to leave MIT just yet. “I feel privileged and honored to be part of this compassionate community,” he says. “I’m also proud — proud that we’ve been able to come together in this time of need.”