A wave of gratitude 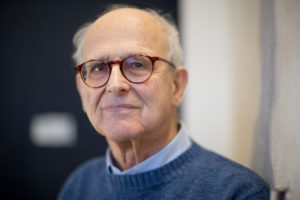 Rainer “Rai” Weiss was born in Berlin, Germany in 1932. His family was forced out of Germany by the Nazis since his father was Jewish and a communist. They fled to Prague, in what was then called Czechoslovakia. In 1938, after UK Prime Minister Neville Chamberlain appeased Adolph Hitler by effectively giving him Czechoslovakia via the Munich Agreement, the family needed to flea Prague as well. They were able to obtain visas to enter the United States through the Stix family in St. Louis. Finally, they emigrated to New York City.

When Weiss was 13 years old, he became fascinated with electronics and music. When World War II ended, he bought some surplus Navy and Army equipment and began making ham radio transmitters and an audio system for his school. Then, after a movie theater in Brooklyn had a fire, he was able to acquire loud speakers and began making high-fidelity equipment. Weiss invited family friends to listen to concerts on his equipment. Word spread of Weiss’ speaker systems; and by his senior year of high school, he had more orders than he could handle. Eventually, he ran into a problem that he couldn’t solve with the “street” electronics he knew: trying to reduce the hissing noise on the shellac phonograph records by using adaptive filters. That problem convinced Weiss he would do well to go to college.

Weiss attended MIT because of his strong interest in electrical engineering. He admits that it scared him when he received the course catalog of everything he had to take, all listed in numbers. He picked electrical engineering as a major, but was disappointed since he would have to take a number of classes before he was able to get to electronics. He ultimately chose physics since the curriculum seemed less rigid. At the beginning of his junior year, Weiss took a trip to Nantucket and met an interesting woman who was a pianist. He fell for her and followed her to Chicago. He took about two months off from MIT since he did not think they took attendance and thought he could get by just by taking the exams. He ended up flunking out of MIT.

Weiss later found a job as a technician in Building 20. It was there that he met the late Professor Jerrold Zacharias, who Weiss says “was the person that had the biggest influence on my life.” Through Zacharias, Weiss was able to get back into MIT and finish his undergraduate degree, and later a graduate degree in physics. During his graduate years, Weiss met his wife Rebecca who was working as a botanist for Harvard University. Weiss and Rebecca have two children, Ben, an art historian; and Sarah, who is an ethnomusicologist.

After teaching at Tufts University and taking on a postdoc at Princeton University, Weiss came back to MIT at the request of Zacharias to be an assistant professor in the Research Laboratory of Electronics. Weiss returned and started a research group in cosmology and gravitation. He got the idea for the Laser Interferometer Gravitational Wave Observatory (LIGO) when the Department of Physics asked him to teach a graduate course on general relativity. He teamed up with Professor Kip Thorne at Caltech and formed a collaboration between MIT and Caltech with the late Scottish physicist Ronald Drever, also with Caltech.

When a gravitational wave — a ripple from the distant part of the universe — was detected by the LIGO team, Weiss received a number of awards for the discovery. At first, he was not sure what to do with the prize money. Weiss knew the importance of supporting graduate students. As a faculty member, he would see MIT losing some of the best graduate student applicants to other universities that had the capability of offering graduate student fellowships. He decided to establish a fellowship in the Department of Physics and name it the Barish–Weiss Fellowship. Barry Barish, a professor at Caltech, was instrumental in LIGO’s success and shared the 2017 Nobel Prize in Physics with Weiss and Thorne.

Weiss is happy that he had the opportunity to give back to MIT. He was so grateful for what Zacharias had done for him that, in many ways, this gift is a tribute to him. Weiss still works every day, even on Saturdays, because he loves his work and being involved with students. When asked what he would say to encourage others to support MIT, he replied, “Anything you can do to help advance students because they are our future.”

This story originally ran in the Fall 2018 issue of Physics@MIT.

Written by
Erin McGrath, Director of Development for the Department of Math and the Department of Physics
Published
December 6, 2018
Tagged
LIGO Physics Rainer Weiss Research Laboratory of Electronics Science at MIT