A chemist who plays with space

Alison Wendlandt explores how the layout of atoms in molecules, such as sugars and drugs, can affect their nature and our bodies 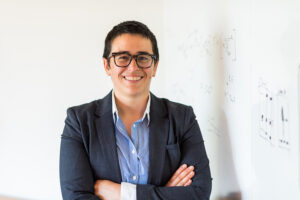 Much of the earthy taste of rye bread is due to caraway seeds. These seeds get their flavor from carvone, a molecule made up of 10 carbon atoms, 14 hydrogen atoms, and one oxygen atom. But earthy isn’t the only taste that exact collection of atoms can create. The minty taste of spearmint is also due to carvone. Which flavor you get depends on the spatial distribution of the atoms in the molecule; if you placed both carvones side by side, you’d see them as mirror images of each other.

The study of the spatial distribution of atoms in a molecule is called stereochemistry. Alison Wendlandt, the Green Career Development Assistant Professor of Chemistry at MIT, explains that when it comes to molecules, it’s not only the atoms that determine molecular properties, but also the very three-dimensional arrangement of the similarly connected atoms.

This spatial distribution of atoms doesn’t just impact flavor. It can also determine the effectiveness of a drug molecule. Wendlandt’s work focuses on finding strategies for fine-tuning the stereochemistry of molecules and, in doing so, how quickly and thoroughly a drug treatment can work in patients.

When Wendlandt entered college, she wasn’t planning on majoring in chemistry; she was a math major. “But I ended up taking organic chemistry, and it just clicked as a language,” she says. Many students approach chemistry via memorization, but for Wendlandt the logic of chemistry innately made sense. “There was no memorizing, just understanding the rules,” she remembers. “And then at that point, there was nothing else I could do.”

Wendlandt’s training is in catalysis, which involves designing a catalyst to get a desired reaction. “A catalyst is any kind of reagent that can promote a reaction but isn’t consumed in that reaction,” says Wendlandt. This can be a reaction that is hard to perform, or one that leads to a specific product or outcome. During her postdoc at Harvard University, she focused on enantioselective catalysis, where a specific enantiomer, one of a pair of mirror image molecules, is generated.

There are a number of aspects of enantioselective catalysis that attract Wendlandt to the work, but two stand out. “One is the importance of chiral drug molecules,” she says. With drug molecules, it’s often the case that only one enantiomer has the drug properties of interest, while the other has no effect or, in some cases, a negative effect. “There are some famous catastrophes where our failure to control or acknowledge the off-target effects of enantiomers led to disasters.” Thalidomide, which was taken by pregnant women in the 1950s, is one such example. “One enantiomer was fine and treated morning sickness effectively, and the other enantiomer was a teratogen and led to birth defect issues,” says Wendlandt. “It was totally a stereochemistry problem.”

Wendlandt is also attracted to the molecular design aspect of the work. “It allows us to make a very small energetic change to reaction coordinates,” she says. In terms of energy, Wendlandt explains, 1,000-2,000 calories — like the ones you consume and use for energy — can determine whether a product is a balanced mix of two enantiomers or whether it’s a pure mix of just the one enantiomer of interest. With catalysis, Wendlandt says, you can actually control the reaction’s path.

Many molecules have stereochemistry, but the class of molecules Wendlandt is particularly interested in are sugars. She explains that, for molecules like amino acids and proteins, their properties are often determined by their functional groups, groupings of atoms on the molecule that give it a specific nature. This is not the case with sugars. “Many of the biological and physical properties of sugars are stereochemistry-related,” Wendlandt says. With some important exceptions, all sugars are isomers, meaning they share the same basic chemical formula. “They just differ in terms of their spatial connectivity.”

In the body, sugars serve a number of functions, from energy and information storage to structure, and they’re also common components in pharmaceutical drugs. Some sugars, such as glucose and cellulose, are easy to come by, but others, particularly those that can be active ingredients in drugs, are harder to produce. These rare sugars “have to be made by chemical synthesis,” says Wendlandt.

Despite the importance of sugars, studying them is hampered by subpar methods for producing rare sugars, says Wendlandt. “And the reason these methods are poor has to do with our inability to manage issues of selectivity,” she says. Because the properties of sugars are determined by their stereochemistry, making a rare sugar often comes down to moving a specific atom from one location on the molecule to another. It’s a major challenge, but one Wendlandt is drawn to.

In a January 2020 paper in Nature, Wendlandt and her lab made allose, a rare sugar, by modifying the spatial distribution of atoms in a glucose molecule. The process involved breaking a chemical bond in one spot and reforming it in another spot on the molecule, which goes against a chemical principle called microscopic reversibility. “It dictates that the way the bond is broken is the same way that the bond is formed,” explains Wendlandt. To get around this, the lab decoupled the bond-breaking and bond-forming process by using two catalysts: one to break the bond and another to form it. With these two separate catalysts and some blue light to drive catalysis, a hydrogen atom is removed from a specific spot on the sugar molecule while a new hydrogen atom is added to another stereochemical position on that same molecule. With this switch, common glucose became rare allose.

Making allose is just the start. What drives the site selectivity of the reaction is not yet clear, and it’s a question Wendlandt and her lab are continuing to probe. “If we can understand why these reactions are selective, we can, in principle, design them to do other things,” says Wendlandt, such as breaking bonds at other sites on the molecule. Once predictability and stability are honed, this method can become a powerful tool in pharmaceuticals, including many FDA-approved antiviral, antibacterial, anti-cancer, and cardiac drugs. “A medicinal chemist can come in and say ‘OK, I want to edit this bond or that bond,’” imagines Wendlandt, letting them fine-tune sugars into potent pharmaceutical ingredients. This tinkering of atoms in a molecule can mean the difference between tragedy and safe, effective drugs.