A brief history of environmental successes 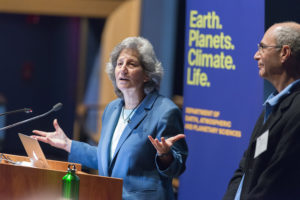 The headlines are full of bad news about the environment but Solomon says she thinks it’s important to celebrate and learn from past successes as we think about today’s environmental challenges. “We don’t have a perfect record certainly, but we have done a lot of things remarkably well,” Solomon began. “Lots of issues have been managed rather than solved, but our performance is still one to really celebrate and above all to learn from.”

Solomon, who joined MIT in 2012, began her research career by identifying the chemistry responsible for the ozone hole over Antarctica, work that laid the foundation for what became arguably the signature environmental success story of the 20th century. As she recalled, in that case, even back when the predictions pointed to problems “far in the future” and while it was still “only a theory,” concerns over ozone depletion were taken seriously not only by scientists but also by the public.

So why then should global warming, the defining environmental issue of our time, be any different? Solomon sees three “P”s generally involved in taking action to successfully combat an environmental problem: Is the issue Perceptible? Is it Personal? Are the solutions understood to be Practical? Strongly linked to these, Solomon also emphasized the inevitable delicate accompanying ballet that has to play out among the public, the perception of the problem, the science, the politics, industry, and technology, each interacting in different ways depending on the issue.

Solomon says she is confident the effects of global warming are becoming increasingly perceptible thanks in part to extensive and ever longer high-quality global temperature records; however, for New Englanders living away from the coast, it may not yet feel deeply personal.

Solomon noted, in terms of practical solutions, climate change occurs on a bigger scale than any other environmental problem humankind has ever tackled. Global warming is also inexorably connected with a world economy built on the back of fossil fuels. It’s also a mineral rights issue. It connects to our cars and our homes and to installed infrastructure in which industry has made massive investments. We need to be realistic about some industries’ strong desire to recoup and to profit from their investments, she says.

Solomon also touched on the moral and ethical dimension of the problem. Comparing per person emissions numbers across the globe, Solomon reminded her audience that “on average, if you take the six and a half billion people that are now in the developing world, they emit about five times less fossil carbon per person than the other one billion in the developed world. What about their future? If they develop using fossil energy to fuel that development the same way we did, this planet is going to get very, very hot indeed, as much as 10 degrees Fahrenheit hotter by 2100. So what about those people’s future? What’s fair?”

In the end, however, Solomon says she’s optimistic because of global increases in the amount of installed non-fossil power in the past few years, and increasing commitments to low-carbon or zero-emission vehicles by many countries.

Although the United States must decide what role we as a nation are going to play, Solomon notes other countries continue to move forward. “We’ll see what happens: This is a 100-year problem; it’s not a four-year problem,” she said. In closing, Solomon reflected that global warming is by far the toughest thing we have ever faced but that she thinks it’s clear that the mix of science, public engagement, innovation, the ballet, her three Ps, and wise weighing of social and ethical choices, are leading us to the means of managing our planet’s atmosphere.

Established in 2011, the Lorenz Center’s annual John Carlson Lecture at the New England Aquarium communicates exciting new results in climate science to the general public. The lecture series was endowed by EAPS Visiting Committee member John H. Carlson through a generous gift to the Lorenz Center in the Department of Earth, Atmospheric and Planetary Sciences. Past lecture topics have included: climate dynamics; the inherently chaotic behavior of the climate; the scientifically puzzling relationship between clouds and climate; and what glaciology can teach us about climate change.