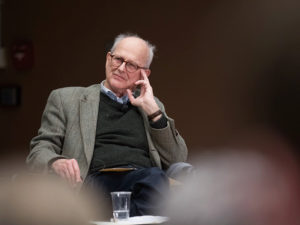 Last year the world celebrated the centennial of Einstein’s formulation of General Relativity. It was a bold new concept of gravitation which replaced Newton’s gravitation by a geometric theory in which matter distorts the geometry of space-time and the geometry tells matter how to move. The new theory was expressed in a set of non-linear equations for which the sources were the matter and energy distribution that induced the curvature of space-time. In 1916, Einstein showed that the field equations had wavelike solutions which carry energy and momentum, gravitational waves that travelled at the speed of light and cause space-time to distort transverse to the direction of propagation. The distortion, a stretch in one dimension and compression in a perpendicular one, can be expressed as a strain (a change in separation of points divided by their separation) perpendicular to the direction of the wave propagation. The waves are generated by accelerating masses, specifically, mass configurations that vary in a non-spherically symmetric fashion (have a time varying quadrupole moment) such as a pair of orbiting masses or an explosion with prolate to oblate distortions of the matter distribution.

Near the end of the 1916 paper, Einstein notes that his estimates of the strain generated by any realistic source were so small as to be unmeasurable and says outright that gravitational waves will never play a role in physics. Given the technology available and the knowledge of the universe in 1916, he was not being unduly pessimistic. The vast improvements in technology such as quantum optics, semiconductor electronics, computers, and the discovery of compact astrophysical systems such as neutron stars and black holes, as well as the discovery of the scale of the universe in the past 100 years, has changed everything.

The first efforts to detect gravitational waves from astrophysical sources were made in the mid-1960s by Dr. Joseph Weber at the University of Maryland using resonant acoustic bars. He reported the measurement of coincident pulses attributed to gravitational waves in a network of three widely separated detectors with strain amplitudes around 1014. This report triggered a worldwide effort which unfortunately did not confirm his results.

In the early 1970s broad band interferometric gravitational wave detectors were conceived with the promise of significantly improved sensitivity. If constructed on km scales, they could approach the strain sensitivity of 1022 and better, values required to intersect realistic estimates of gravitational waves from astrophysical sources.

A strong motivation to actually construct such detectors came from the Hulse-Taylor observations in our galaxy of a binary neutron star system, one of which was a pulsar. The dynamics of the system were tracked over a decade by precision measurements of the arrival times of the pulses and revealed by careful analysis the need to include the gravitational radiation reaction on the orbital dynamics of the system. The observations received the Nobel Prize in Physics in 1993 and were the first observations of the effects of gravitational waves.

After prototype development at MIT, the Max Planck Institute, Glasgow University, and Caltech, as well as a study of the feasibility to build a km scale detector by MIT, Caltech and MIT proposed to the NSF to build and operate the Laser Interferometer Gravitational-Wave Observatory (LIGO). The basic elements of the proposal were to have two detectors with 4 km arm lengths separated by 3000 km. The facilities were to be built to accommodate an initial interferometer using the technology developed in the prototypes followed by an advanced technology detector with significantly higher sensitivity and a good probability of a making a detection.

Construction of LIGO started in 1994 when Dr. Barry Barish of Caltech became Director of LIGO. Barish established the LIGO Scientific Collaboration (LSC) which, in addition to Caltech and MIT, now includes 90 institutions around the world with 1000 members. The first runs with the initial interferometers were made in 2002 followed by several more runs of progressively higher sensitivity with the last run in 2010. In 2007 the Italian-French VIRGO interferometer project joined with LIGO to share data. The initial instrument achieved design sensitivity but did not observe gravitational waves at a minimum strain of 1022 around the most sensitive frequency near 100 Hz. The LSC wrote several papers setting interesting upper limits on a variety of impulsive and steady gravitational wave sources. We were breaking new scientific ground.

The performance of the initial detector gave the NSF the confidence to fund advanced LIGO. Advanced LIGO became operational in 2014. Improvements had been made in every subsystem of the detector. In September 2015, the detectors, although not yet at design sensitivity, were a factor of three better than the initial detectors near 100 Hz and more than 10 better at lower frequencies. We decided that the improvement was significant enough to make an engineering run followed by a three-month science run.

At the end of the engineering run on September 14, 2015, we detected the high signal to noise waveform of the collision of two ~30 solar mass black holes merging to make a single black hole. The signal had a peak strain 1021 in a chirp lasting only about 200 milliseconds that began in our detectors at 30 Hz and ended at close to 250 Hz. The signal was so strong one could see it clearly without any fancy signal processing. The waveforms satisfied our conditions for detection of a gravitational wave.

The waveforms were the same in both the Livingston and Hanford detectors, they were coincident within seven milliseconds at the two sites, and they did not coincide with any environmental noise in the sensors of the environmental monitoring system nor noise in any of the many interferometer subsystem monitoring channels. In the three-month run that followed, several smaller amplitude events, most likely also black hole collisions, were observed and are being analysed at the time of this writing (February 2016).

The significance of the detection is:

The future for the field looks promising. Since the detectors measure the amplitude of the gravitational wave strain, the depth one is able to probe into the universe grows linearly with sensitivity improvements. The rate of events will grow with the volume of the universe open to investigation. When we achieve design sensitivity of the detectors, the sensitivity will be three times better than the run and the event rate for black hole collisions will be around 30 times larger, so something like an event per day for black hole collisions. With the completion of the upgrade of the VIRGO detector hopefully by the end of the year, the ability to localize sources in the sky will be improved to allow a more efficient search for electromagnetic counterparts to the gravitational wave events. In the longer range, interferometers in Japan and in India will join the network, enabling localizations to about 1 square degree on the sky.

Black hole collisions are not the only sources one expects to observe. Other compact binary sources composed of pairs of neutron stars and neutron star/black hole pairs are also expected. Searches for continuous wave sources such as gravitational waves from pulsars due to a lack of sphericity could well succeed. A gravitational wave noise from unresolved distant sources is also expected to exist. As with every new way of looking at the universe, it is likely that new totally unexpected sources will also be uncovered.

There are also ideas to further improve the detectors past advanced LIGO design sensitivity with the longer term hope of extending the reach of gravitational wave astronomy into cosmology. The current discovery is just the beginning.